Cyberpunk 2077, what a game, eh? From a development cycle that seems to embody the corpo exploitation and hell world the game itself calls out for us to decry and loathe, to glitches, to security vulnerabilities, to design features that were ill-conceived and implemented poorly, it is fair to say the game is a mess. And yet, I mostly agree with The Sphere Hunter. Maybe strangely, the fact that it is mostly exterior, and no interior, makes it accidentally quite Cyberpunk. Maybe there’s something from the future in the old Cyberpunk projection of their respective Idoru creators and we’re already in a Cyberpunk world at the cusp of becoming — without any of the cool cyberware.

Or maybe not…this post isn’t about the themes and arguments others have made but to point out two things I haven’t seen widely discussed elsewhere (not to say no one has talked about it, just that I haven’t seen it). The game has a very interesting take on spiritualism, which is fleshed out enough to be noticeable, but vague enough to let you dismiss it as midwit or let your vibe with it and take it to new levels. I think it’s intentional, and good, actually, but we’ll get to that later. First, there’s this character I haven’t seen garner much attention:

They’re not twins! They’ve got cyberware in their heads to synchronize their thoughts. It is one singular person. Is this a reference to something? It seems like it must be, like so many other stand-out characters in the game they are either a reference to something from Cyberpunk 2020, the real world, or Cyberpunk fiction. I keep thinking of the Star Trek TNG episode “Loud as a Whisper,” particularly the character of Riva (and their chorus), but perhaps that’s a coincidence.

This character from Cyberpunk 2077 is interesting. They used to be twins, then they installed neural synchronizers, and now they’re not twins, and insist they are one person. Yet, they keep talking to themselves out loud and admonish themselves for doing so, and most strangely, they share a girlfriend with something like a child custody arrangement. Every other day (more or less). Why would you do that if you’re one person? Why not do the Doctor Manhattan thing? Oh wait, is this a reference to Doctor Manhattan? IDK.

The second thing I want to discuss, a bit more in depth, is the spiritualism in the game. I am sure others have said this is, uh, fake and flimsy and bullshit. An atheists view of spiritualism. An idiot’s view of philosophy. Deepity and pseud nonsense. I disagree, however, and think it’s actually just genuinely part of their overall narrative perspective.

First, it’s fairly integral in not just the main missions but also the side jobs. From monks discussing their values, to a strange invisible Zen master only you can see, to the Tarot cards, to a street preacher, to a quest of Christian redemption mixed with corpo exploitation and a dash of XBD — it’s everywhere. Second, it has direct connections to the Cyberpunk Red source material, and even seems to vibe with some of Gibson’s works.

As an aside, before we continue down this trail much further, I have to recommend The Inner Moon’s post on Cyberpunk Red (or a video essay if you’re so inclined). I was encouraged to go out and get the source book, even run a Cyberpunk Red game. And I’m very glad I did. One thing I find very interesting is how the main plot of Cyberpunk 2077 follows the core rules listed out in how to run a good campaign In the Time of Red, including the rule to break all the rules! So, I think in many ways this game is what you’d expect from a Pondsmith campaign, in terms of narrative and scope, and that’s preem.

Ok, back to it…in many ways the tarot card readings you can (optionally) listen to are actually describing the plot beats of the game in that moment, and the potential choices you have (95% of dialogue choices don’t make a damn bit of difference but the tarot card readings actually obliquely reference what parts of the 5% are about to happen to you). Also, in each of the endings there’s one more reading that really indicates which endings the devs think are good, bad, and mysterious.

But…at many points in the game, we get a glimpse of characters, powers, and forces in the world that others treat as literal gods. I think of the first season of Altered Carbon, and the idea of someone treating the Meths as a human-made god. Cyberpunk is not Altered Carbon, and the only group that seems to approach the awe some have for the Meths are the Voodoo Boys, who hold this fear and reverence for only what lurks beyond the Blackwall. But, this makes a lot of sense: the game narrative really does show us how the corpo masters of the universe are human even before we have any chance to really see the extent of their power, so it makes sense.

If the spirituality was not just fluff to seem deep, it seems to imply a higher power. Of course, the game dev has a perfect view of the plot, and can cheat, but the narrative suggests we believe in a higher power in the context of the game — rogue AI, corpo masters of the universe, or even scientists from Alpha Centauri. But, in a conversation you have to listen to in order to advance the plot: maybe they’re all despots living in a bubble, trying to remake a world that may never have existed? 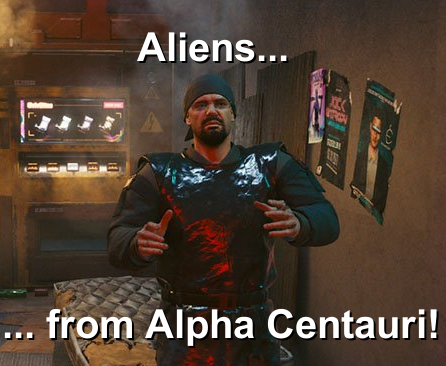 So when I see these spiritual elements, I see it in contradistinction to how the powerful are portrayed, and start to see a theme of spirituality as a way of dealing with the complex dynamics of a massive nest of overlapping human realities. Synchronicity occurs whether it is because of a supernatural higher power or a rogue AI zeroing out your personality engram and taking over your body. Night City is chaos, that appears planned, but maybe it isn’t — not even if you’re in the penthouse suite living out your days as a legend.

Maybe the corpo plots Johnny Silverhand sees in everything, and which we uncover quite a lot, are just a post hoc justification for the most powerful themselves being just a bit of flotsam on a tumultuous sea. Like Conway’s game of life, the rules are already set, and everything follows deterministically (yet chaotically) from that first move. Maybe those with power exercise it in this game so severely because they sense everywhere they cannot have any control, that everything is about survival and it’s all personal. Misty and the Zen master are then not just fluff spiritualism added to make the game seem deep, but rather actual in-game Idorus (an option for the rockerboy role in Cyberpunk Red that fits both of these enigmatic characters perfectly), engaging in an irrational process to pull out a glimpse of the future from the present. This isn’t so much forecasting the future through a deep connection to the universe, but teasing out the threads of truth from grokking the shared human reality.

Laney’s node-spotter function is some sort of metaphor for whatever it is that I actually do. There are bits of the literal future right here, right now, if you know how to look for them. Although I can’t tell you how; it’s a non-rational process.

Does any of that need a metaphysical component? A higher power? A literal god? Not really. The higher power is just the scale of human interaction causing all manner of emergent phenomenon. The higher power is Night City, judging us and luring us in with promises of impactful in-game choices, then betraying us when it makes us hustle just to save ourselves. But the city is as dead as it appears in game. The game’s disappointment between promise and delivery — something you see in Night City as you realize the vibrant city is anything but — mirroring the disillusionment you may experience. When you realize the eldritch gods that pull at the strings of our lives are just turkeys ominously circling a carcass without a single member of the closed circle actively choosing to make it happen, it’s hard not to feel like you’re on a plot beat written by someone else.

Yes, the narrative design team crafted this synchronicity, but…did they also exist in the real world as they wrote this? Probably. We aren’t free, unentangled and maximally empowered, gods that can fuck off to Mars when the world depresses us and we get tangled in the churn of chaos (no, you’re not Doctor Manhattan). We are an interacting system, making connections across the world every day, and sometimes this yields predictable correlations in events and sequences and history. I’ll end with an excerpt from wikipedia:

In statistical mechanics, a universality class is a collection of mathematical models which share a single scale invariant limit under the process of renormalization group flow. While the models within a class may differ dramatically at finite scales, their behavior will become increasingly similar as the limit scale is approached. In particular, asymptotic phenomena such as critical exponents will be the same for all models in the class.